When a show is titled The Writer, it’s setting itself up to be judged on the quality of its writing.

Frankly, there’s no gentle way to put this. The Writer is not well written. It is a mess of cliched dialogue, poorly thought out plot leaps, unexplored ideas and utterly one dimensional characters. It is difficult to tell what the message of the play is, which is a pity, because it clearly so desperately wants to have one. The original crowdfunding write up described the production as an examination of mental health, but the final production doesn’t demonstrate that at all, unless you count incoherence as a symptom of ill-mental health. Instead, The Writer focuses on a father-son relationship that is apparently intimate and neglectful all at once. 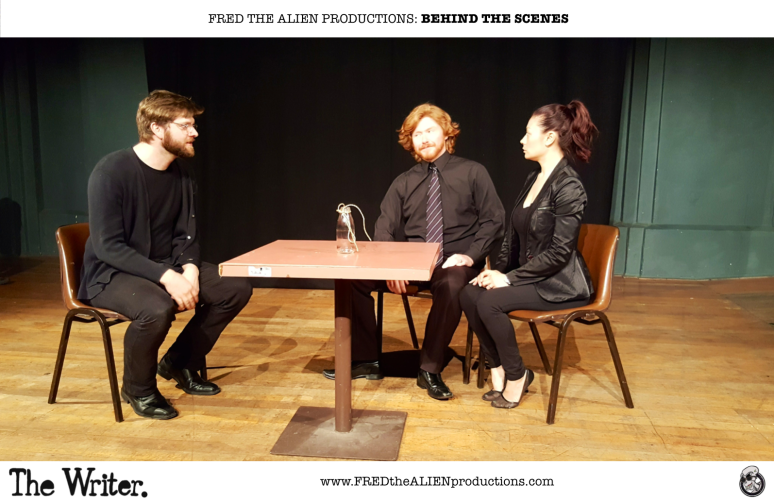 After seven years of raising his son Sam on his own, Geoffrey is shocked when his ex Elizabeth shows up with a new husband, demanding she be able to spend time with her son. Geoff says no, furious that she could dare suggest such a thing after ‘what she did’. It’s not clear exactly what Elizabeth’s demand is here. If she just wants to spend an afternoon meeting her son and slowly building a relationship of him, that seems pretty reasonable. But Geoff acts as if she’s demanding full custody. As it turns out ‘what she did’ was leave after Jeff refused to give their son up for adoption – a position she’d apparently been clear on throughout the whole pregnancy.

Thrown into this melodrama is Geoff’s writing, which, no surprises, is not very good. He wants to write a play of Arthurian proportions, like Game of Thrones but more PG. Instead, the play just becomes his own story recast to make him seem like a romantic hero trapped at the centre of a tragedy. The program claims the production to be ‘multi-layered’, but it’s not, neither emotionally nor narratively. There are so many unanswered questions. Why is Geoff’s play suddenly a musical? Why is his unicorn play the only thing he has left of his son? Why is Elizabeth absent from the second half? And why oh why does a 90 minute production need a 10 minute interval?

There were some clever and enjoyable moments in The Writer. The conceit by which the ensemble acted out what was being written gave rise to several laughs, as did the enactment of Wikipedia, which felt more like a parody of improv troupe warm ups than something that had any place here, even as Jeff’s ‘research’. Likewise, the innocence of Sam, and his own gentle storytelling, as a narrative highlight. David McNamara, who played Sam, certainly had the most material to work with.

The production itself was reasonably solid. The actors gave their roles and lines their all, though with the writing and some particularly poor blocking, they frequently struggled against melodrama. The staging was mercifully simple, and so was the costuming. Twice, a female cast member stripped down to a bathing suit and red suspenders for particularly flimsy reasons. From misinformed or outright abandoned plot threads, character motivations, jokes, to perplexing moments of partial nudity, the vast majority of this play seems more like a stew of all the things the writers may have thought could work without giving too much thought to how, or, perhaps more critically, why.

It would be very easy to spend a few thousand words critiquing the entire script, pointing out all the unexplained leaps and the ridiculous language. It would, however, also make for a pretty boring and potentially hurtful review. It’s hard to know whether to use the space of this review to provide constructive criticism, moments for improvement, or whether to just describe the production and advise readers against seeing it. Hopefully, The Writer will be a great learning experience for the newly launched Fred the Alien Productions. May their production next year be better.

The Writer is on at Gasworks Arts Park at 8:30pm from the 15th until the 17th of September. Tickets are available on the Gasworks website.