Whether you have never seen a burlesque cabaret show, or whether you are a veteran, the After Hours Cabaret Club, located at Bennetts Lane, makes a fantastic show that is as rambunctious and bawdy as it is entertaining. In the words of an audience member who was volunteered for an opinion on the night, it was “the best show he’d ever seen”.

When entering the venue – a dimly lit jazz bar that is usually associated with “serious” jazz – the first thing that was noticeable not only the band on stage, but the mimes roaming the floor, “chatting” to people, getting them off their phones, and generally psyching them up. One of the mimes – David Splatt – also joined the band on stage a few times to play the saw (a really cool instrument and something that should tell you all you need to know about the ambiance of the place).

Tash York, the MC of the evening’s revelries, started the show with an adult version of Disney’s Beauty and the Beast song Be Our Guest – which really set the tone for the evening. It should be noted that she carried the show very well, keeping the audience psyched between acts and ensuring that the tone remained upbeat and excited (her audience wasn’t the most excitable, but they got there in the end). Her own acts – singing and creating balloon hats mid song – were also impressive, and great fun to watch (and participate in). 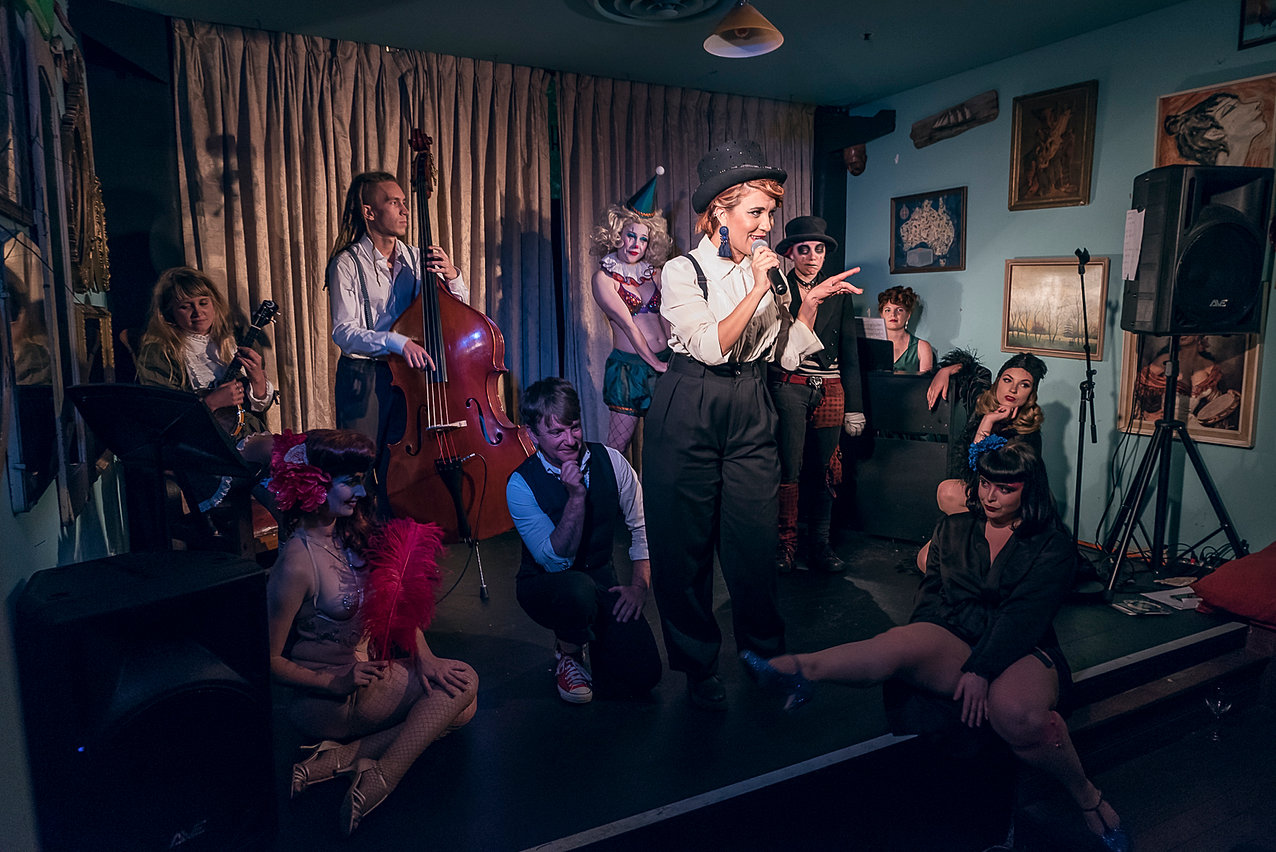 The majority of the show was a variety of burlesque dancers, all of whom were very skilled. Their acts ranged from the hilarious and ridiculous (Kelly Ann Doll’s opening involved giving a lap dance to a hapless audience member whilst his date looked on in bemusement), through to the sensual and erotic (Porcelain Alice got quite a reaction when she ended up taking her gloves off, that’s all I will say), and even including the strange (the hula hooping burlesque of Clara Cupcakes) and almost unsettling (Raven’s “nails up nose” routine had quite a few gasps from the audience). All the acts were very enjoyable however, and certainly displayed the diversity of the burlesque scene.

By the way, if anyone wants to start a burlesque company, may I suggest using male dancers to get the biggest reaction from the audience. Wild whoops and cheers seemed to be in abundance when the male “boylesque” dancer Raven got on stage – even more than when the lady dancers brought out the nipple tassels.

Although the majority of the acts were burlesque dancers, there were other entertaining acts which helped keep the audience engaged. The introduction and conclusion of each act was led by the After Hours Cabaret Band (made up of a double bassist, a mandolin player, a violinist, and a pianist), and other acts such as the vaudeville flea act of David Splatt, or Tash York’s balloon hat act certainly gave the show more depth to it. Also, well done to whoever chose the order of the acts. There was an ideal balance between “ridiculous” and “audience based” acts and those which were focussed entirely on the performers themselves. It kept the audience engaged without having them worked up into a frenzy – very well done.

One great thing about this style of performance is that when mistakes are made, it can be played off. Although at times this was a problem (the musicians were a bit nervous and didn’t have the polished performance that the others did), for the most part the performers were able to simply roll with the heckles and the slip ups. At times they even incorporated it into their act (the other mime dropped her juggling balls, but played it off so comically it was difficult to tell whether it was deliberate or not).

After Hours Cabaret is a solid show, although definitely not one to take your puritanical friends or family to, it is nonetheless a fun evening of debaucherously bawdy fun.