Written by Charlie Kaufman, Anomalisa began life as a sound play staged by Carter Burwell (who returns to provide the music for the film) with all parts played by the three actors who perform in the film. While the idea of it being turned into a movie had been bandied around, Kaufman was never that big of a fan of it, perhaps because to Kaufman, who had up until that point only written or directed live action, the concept of most characters being voiced by a single actor seemed difficult to pull off. Somewhere along the line the stop-motion was put on the table and I’m glad it was.

David Thewlis plays Michael Stone and Michael Stone is bored, he has been for near a decade now. He is a public speaker and well adored writer of books on customer service, and when the film finds him he’s headed to Cincinnati to promote his new book “How May I Help You Help Them?”. Throughout the film Stone is haunted by the voice of Tom Noonan. Everyone from the nervous man next to him on the plane, to the Cincinnati zealot taxi driver, to his old abandoned fling, even his wife and son, all of them are voiced by Tom Noonan (No chance it’s a coincidence that the hotel Stone stays in is named the “Fregoli”).

“It’s boring. Everything’s boring,” says Stone replacing his slumped floating boredom with a brief flash of actual anger. This catatonia-inducing dullness meets its potential defeat in a young customer service representative named Lisa (Jennifer Jason Leigh). While deeply insecure, she is passionate about her work and perhaps a little infatuated with Michael Stone. He encourages her and as we see him romance her out of her rut we see him begin to find the way out of his.

The film adaptation was originally set to be a 40-minute short film funded by Kickstarter, successfully making $406,237 in pledges from 5,770 backers. After the Kickstarter campaign, more money was eventually secured by the producers and the runtime was extended to feature length. 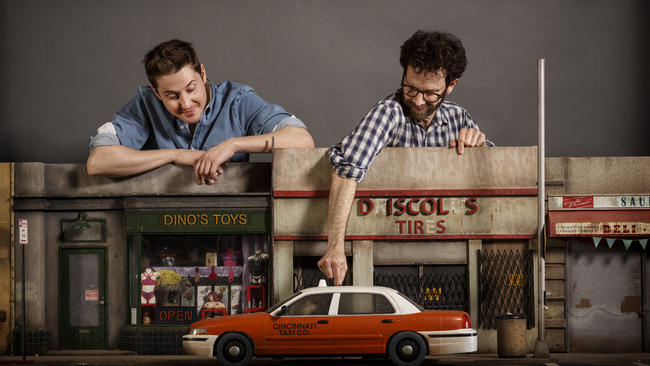 Duke Johnson, who co-directs Anomalisa with Charlie Kaufman, utilized puppets created with 3D printers and was once warned that they would be too “disturbing and off-putting” for the audience and it is strange at first, as stop motion tends to be. For the first twenty minutes or so it feels like a crime scene re-enactment performed by puppets. But what this leads to eventually isn’t a disconnect but in fact something more affecting than you’ve readied yourself for, a replication comfortable in its lie, more sincere because of its lack of pretensions towards convincing us it is the truth.

Charlie Kaufman is the master of mundane emotions—which sounds strange to say about someone who has brought films like Eternal Sunshine of the Spotless Mind, Being John Malkovich and Synecdoche, New York—but he captures better than anyone the emotions, states, inner trials that are felt by most at some point but don’t necessarily have simple one word titles or definitions in the OED. The characters you identify with in a Kaufman film, what parts move you, make you cry, make you laugh, seem to change with every viewing. Eternal Sunshine of the Spotless Mind in 2005 is very different to Eternal Sunshine of the Spotless Mind in 2010, or 2016. Kaufman is a writer whose work deserves revisiting over long periods of time, perhaps even requires it. For this reason, reviewing Anomalisa from only one viewing seems only half fair. This is a brilliant film, but as Michael Stone says to Lisa “I think you’re extraordinary… I don’t know why yet, it’s just obvious to me that you are…”

Anomalisa is in limited release from February 4th, 2016. Check your local cinema for showing times.